Snaptain A10 is a mini foldable quadcopter drone that is suitable for first time drone users. It’s in the cheaper price range, yet it has all the common featuers, such as 1 button take-off and landing, auto return and also app controls. A10 has built-in 720p camera (no audio) that can be used to transmit image to your smart phone or tablet. Controller has buttons for photo and video.

It can also do some tricks, such as circle, spin and 360 flip. However range is not the best, it’s about 20-30 meters. Flight time is about 5 – 8 minutes, depending if you’re using the camera or not. Camera doesn’t have built-in sd card slot, so it only feeds the image back to your phone / tablet and you can record the footage via your smart device, but obviously sending / receiving video requires a lot of Wi-Fi power and that drains the battery, just like on your phone, when you’re using wifi, then battery runs out a lot faster.

A10 comes with propeller guards, which means if you’re new to the drone and crash it couple of times, it won’t break easily. Good thing is that it also comes with 2x batteries, which are very easy to switch out. Batteries can be charged with included USB charger that takes about 30 minutes to charge 1 battery. Best part about this drone, is that you can fold the wings and blades and put it in your pocket! This is not possible with a normal drone, as you’d just end up breaking the wings or blades, but that’s not an issue on this drone.

Enough said, if you’d like to see this drone in action, check out the review video below:

Here you can also see some screenshots of the app:

Let’s take a look at this cool LBLA foldable mini quadcopter drone! It’s very basic design and you can fold in the propeller arms, so you can fit this in your pocket! It has a small headlight and rear light. Here’s a list of Cons and Pros.

For more detailed review and flight testing, see the video below 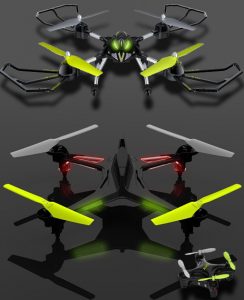